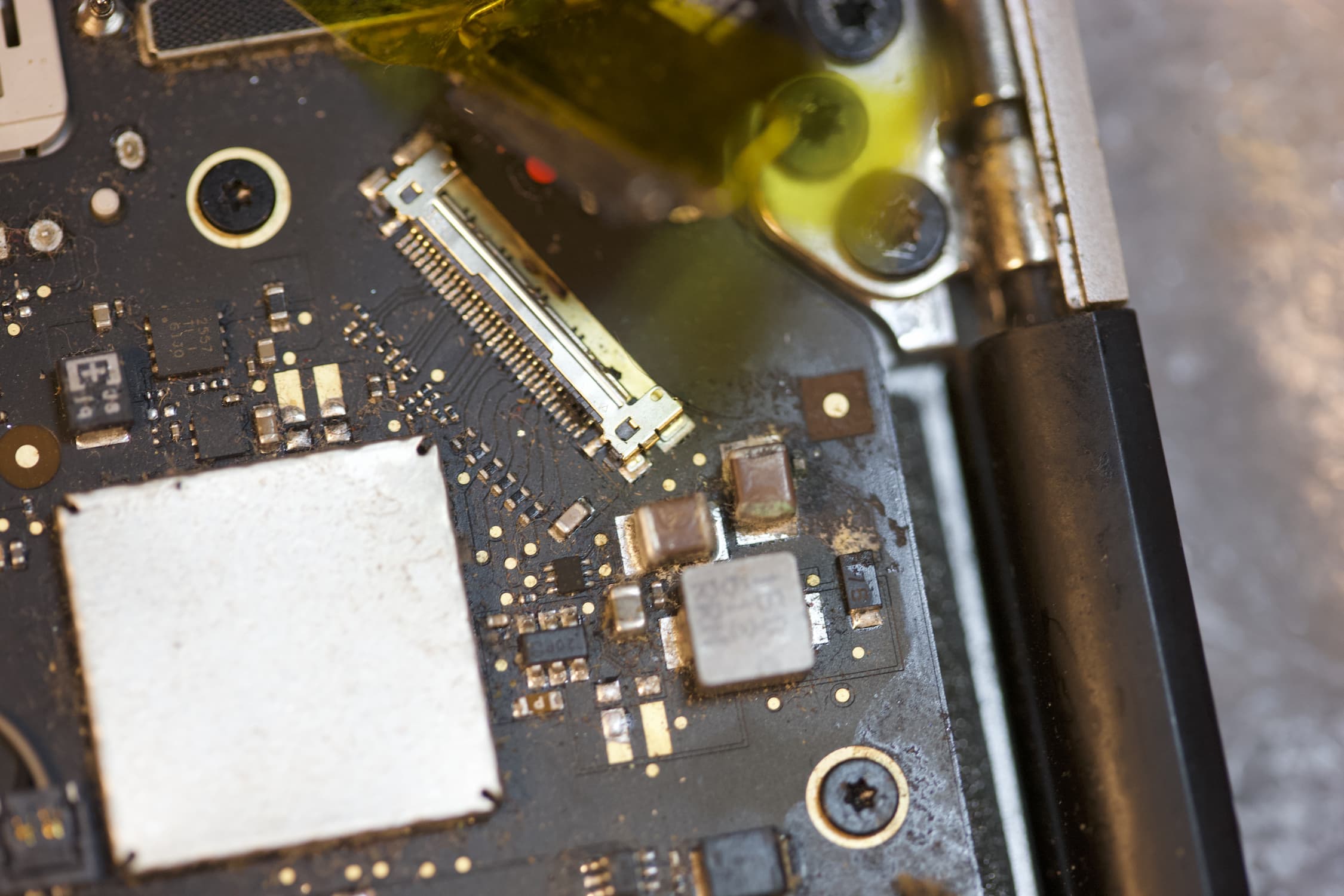 A client reported that their computer was really dim and they thought they needed a new display as the backlight was not working. For the A1466 2017 MacBook Air model they had, it is super rare for those LED backlights to fail. It is much more common for there to be an issue with the logic board that is causing it not to send power through to the display.

Once the computer arrived I took it apart and tested the backlight fuse, which tested as bad. I then removed the LVDS cable, and bam, found the liquid damage that caused the issues.

As you can see in the pictures below, a small drop of water shorted the backlight pins on the LVDS connector on the logic board, and also caused damage to the pins of the LVDS connector that is coming from the display. Due to the age of the machine and the types of repairs, this basiclaly totaled the machine. It would cost more to repair it than it was worth. Thankfully the client was used to using it with an external monitor, so they decided to just keep using it like that until they were ready to buy a newer machine.

For a lot of computers, if there is a problem with the LVDS cable, the tech is pleased because the cost of an LVDS cable is almost nothing. Just swapping out that $5-10 part and you have a working machine! But not the A1466 MacBook Air. The LVDS cable is routed through the hinge of the display and connects to the LCD panel underneath the bezel, which is held in place by some very strong double-sided sticky tape. This display was not designed to be taken apart.

If the LCD cracks during the bezel removal, you will have to swap out the LCD panel as well as the LVDS cable. Most shops don’t know how to remove the bezel without cracking the LCD panel, so it is likely you would want to just replace the entire display assembly with a used part. No matter how you look at it the cost for the display side of the repair would likely be at least $80-120.

LVDS Connector on the Logic Board

Either way, the logic board repair fee is usually flat for most shops (as it is for us), so it costs about $150-200 to repair that logic board.

Now the sad part, the value of these 2015 MacBook Airs is about $250 in working condition. For both of these repairs, you would be either right at, or right above the value on the machine. I really like being able to repair computers, keeping them out of the landfill, and allowing their users to enjoy them for years to come, but sometimes the cost of the repair is just a little too much and I can’t recommend repair.

This is one of the cases where our free diagnosis was utilized. The client decided to use the computer as is, and wait to buy a newer machine for a while. There was no charge for the diagnosis so they were able to make an informed decision without having to spend any money.

If you need help with your Mac, please consider us for your project.